Nematodes identify the odor of cancer with great accuracy

Takaaki Hirotsu, a biologist and currently the CEO of Hirotsu Bio Science, has been engaged in nematode olfactory research and discovered that nematodes can detect the odor of cancer in human urine under certain conditions and highly precisely “sniff out” cancer.
“N-NOSE” stands for “nematode nose.”

The results shown in Figure 1 were obtained from basic studies of N-NOSE and show that with high probability nematodes are drawn to the urine of cancer patients but avoid that of healthy persons. 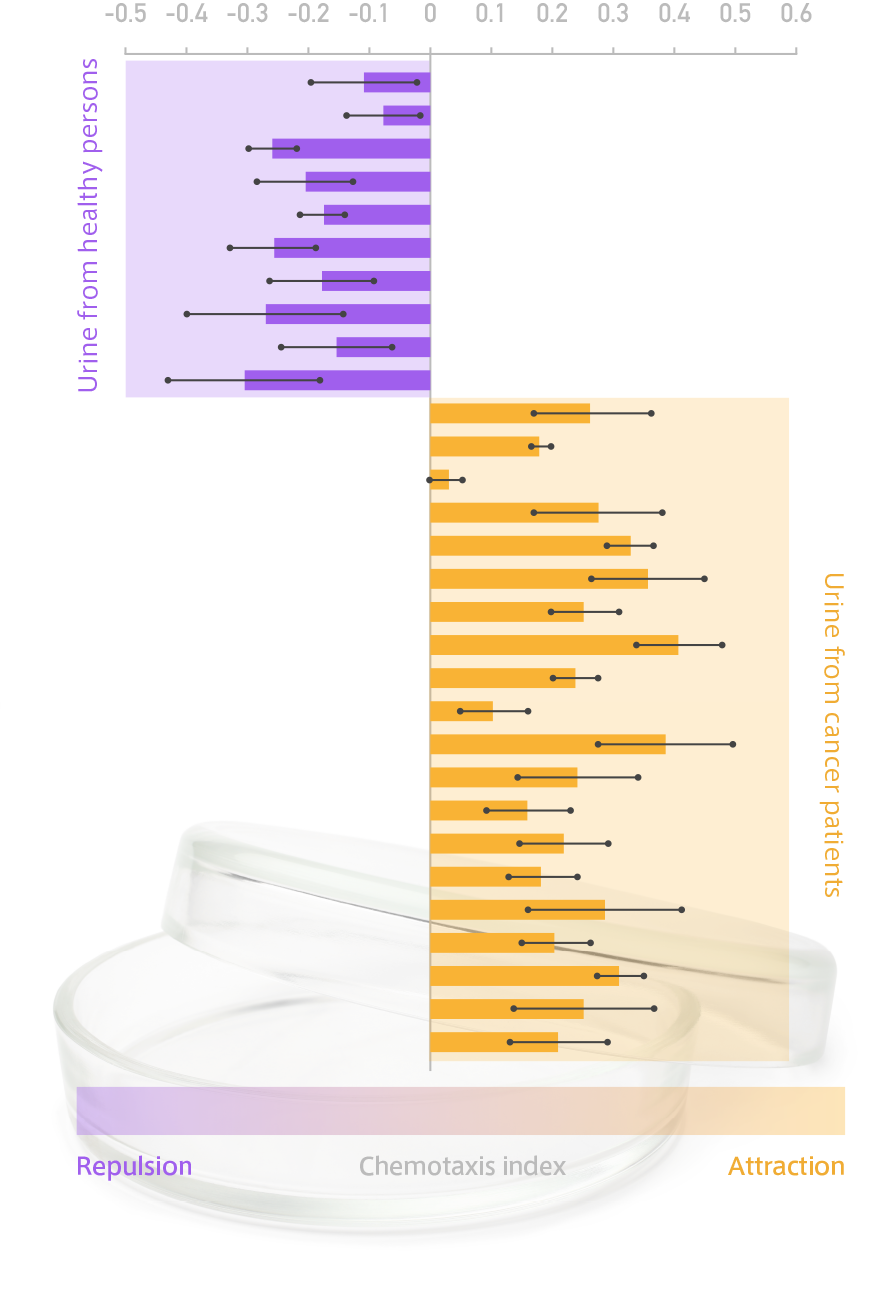 Use of nematodes achieves both
High precision and Low cost

The idea to use nematodes, live creatures, in cancer testing has its origin in the following: they haver superior olfactory sensors that no man-made device can come close to, and they are inexpensive to breed.

Nematodes have a larger number of olfactory receptors than dogs and are able to detect minute odors that machines cannot be detect. Each nematode lays as many as 300 eggs and feeds on coliform bacterium E. coli, making it inexpensive to breed C. elegans populations. Most of the currently available cancer tests use artificial devices and kits. If we are to use these to detect faint cancer odor, such devices and kits would become very expensive and the cost of testing would dramatically increase.

In addition to high accuracy, cost is important in order to encourage many to take cancer testing—and it is nematodes that allows us to achieve such goal.

The C. elegans nematode is not well known to the public. However, it is the first multicellular organism to have its entire genome sequenced and is a very popular model organism in biological research. In nature, it lives in soil. Because it has no eyes or ears, it relies on smell to navigate its environment and detect food. C. elegans therefore has a well-developed sense of smell and about 1200 types of olfactory receptor genes. Humans have about 400 kinds of olfactory receptors and dogs, which are well known for their superior sense of smell, have 800 kinds. It is therefore obvious that C. elegans has extraordinary olfactory ability. 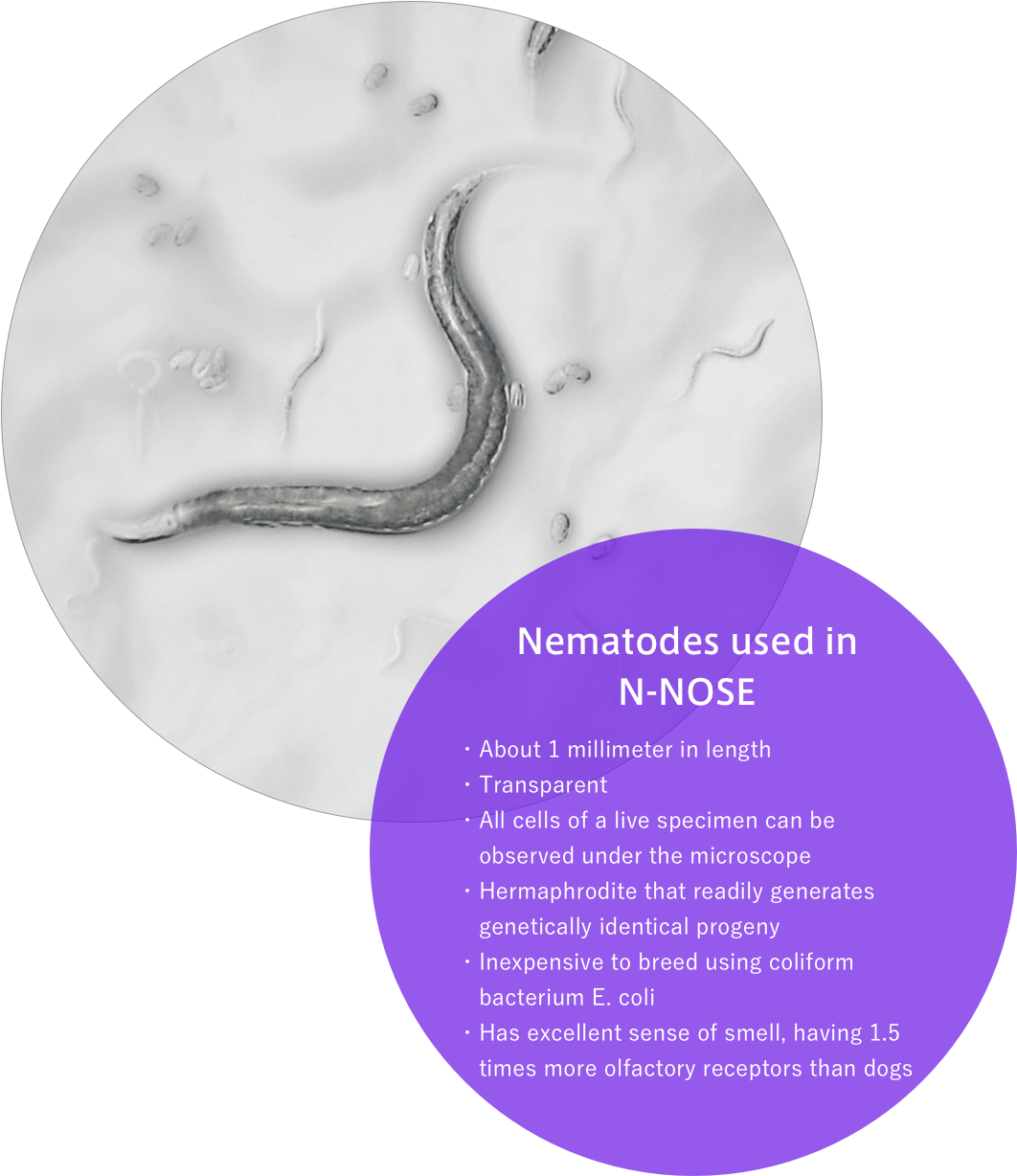 Nematodes made it possible to detect Stage 0 and 1cancers

Currently available cancer diagnostic tests often do not detect incipient cancer and it has been thought very difficult to know the existence of cancer at an early stage. However, nematodes respond to the minute odor of cancer, which is undetectable with existing tests, and thus make it possible to predict risks.

In a basic study where the sensitivity of N-NOSE was compared to that of currently available tests, N-NOSE alone was able to detect Stage 0 and 1 cancer, maintaining its sensitivity throughout.

N.B. We will update from time to time as to the results of our clinical studies. 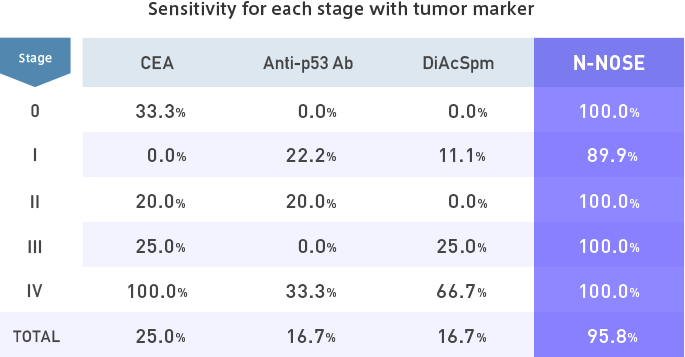